FREE MP3 DOWNLOAD OF KINGS HIGHWAY'S NEW SONG "IT'S ON" 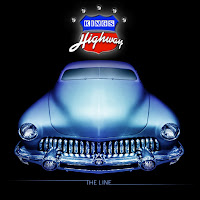 Kings Highway melds scorching roadhouse blues, groove-based Southern soul and classic rock sensibilities into one highly entertaining package. Originally formed in 2008 by guitarist Mike Schultz, drummer Tommy “Tomahawk” Purcell and powerhouse vocalist Cedric D. Square in southeastern Wisconsin - coincidentally not far from where early blues pioneers Son House, Skip James and Charlie Patton all cut their earliest records - the band released their self-titled debut album in 2009 and became an instant regional hit with their explosive live performances. Kings Highway took on a new dynamic in 2010 with the addition of noted guitarist and producer Mike Stone, before entering the studio to record their forthcoming full-length effort The Line. Bassist Guy Bazilewich recently joined the ranks adding even more dimension and texture to the band's signature sound.
The Line showcases the quintet's dexterity and power as they effortlessly shift from raucous, unapologetic blues to swaggering '70s soul, while also incorporating echoes from rock greats such as The Allman Brothers and The Stones. Kings Highway may have been born and bred in the heartland of America, but with a rough-and-tumble sound that weds post-war blues with Southern soul it shouldn't be long before they're embraced by a much larger audience.
Kings Highway's The Line is available now through Rat Pak Records on CD and digital formats.