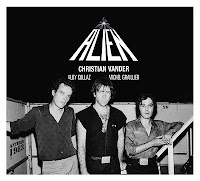 Much to the elation of Magma/Christian Vander fans worldwide, a rare recording of jazz trio Alien live in Antibes, France in 1983 has been released on CD. Part of Seventh Records AKT collection (AKT XVI), Alien features Christian Vander on drums Michel Graillier on piano and Alby Cullaz on bass.
The CD is also highlighted with long extracts from fully unreleased studio sessions. In February 1988 the trio entered the studio to work on an album, but the project never got off the ground. Following the death of Alby Cullaz in 1998 and Michael Graillier in 2003, the recordings were shelved until now. The CD showcases the moving intimacy of the studio sessions and the incredible energy of this unique concert, along with honoring the memory of these great musicians who passed away before their time.
Christian Vander was born of February 21st, 1948. From an early age his mother introduced him to the company of famous jazzmen such as Elvin Jones and Kenny Clarke. Indeed, Chet Baker gave him his first drum kit. He listened to all the greats of jazz and especially John Coltrane, whom he had the chance to meet only once. Vander also listened to composers such as Wagner, Stravinsky and Bach, as well as many rhythm & blues bands and singers. He formed his first group, the Wurdalaks, in 1966 and wrote his first themes at the time. Following the death of John Coltrane in 1967, which had a profound affect on Vander, he left for Italy where he played in clubs with jazz and R&B groups.
In 1969 Christian Vander founded Magma. Between 1969 and 1984 approximately 50 musicians entered the ranks of Magma, many of them destined to become musicians of great renown: Didier Lockwood, Jannick Top, Claude Engel, Bernard Paganotti, Yochiko Seffer, Teddy Lasry, Michel Graillier... Magma quickly gained an international reputation, notably following their appearance at the Newport Jazz Festival in 1973, where the band was joined by the Brecker Brothers. In the course of Magma's first album, the band tells the story of a group of people fleeing a doomed Earth to settle on the planet Kobaïa. Later, conflict arises when the Kobaïans, who are descendants of the original colonists, encounter other Earth refugees. A distinguished aspect of Magma's music is that Vander actually invented a constructed language, Kobaïan, in which most lyrics are sung. Later albums told different stories set in more ancient times; however the Kobaïan language remained an integral part of the music. At the present time 22 Magma albums have been released.
In 1979 Christian Vander formed a parallel complimentary group to Magma, the Alien Quartet, with Benoit Widemann, Patrick Gauthier, Jean-Pierre Fouquey and Dominique Bertram. This group was followed by the Trio Vander (Alien Trio) with Michel Graillier and Alby Cullaz. Two trio albums were recorded between 1990 and 1993. The Vander Trio today, featuring Emmanuel Grimonprez on double bass and Emmanuel Borghi on piano, appears regularly in France and the rest of Europe.
In 1983 a new, complementary Magma line-up with a largely acoustic slant was created, being based on voices, keyboards and percussion. The first Offering concerts took place in October 1983 in Paris. Two albums 'Offering 1 & 2' and 'Offering 3 & 4' were released in 1986 and 1990. In May 1993 a new album appeared, 'Affieh'. This was an important stage for Christian Vander as it showed a return to his roots in Magma.
Between 1992 and 1993 Christian Vander directed the group Les Voix De Magma, comprised of a dozen musicians and singers. The repertoire, largely inspired by the main Magma themes, put a new perspective on the vocal aspect of Vander's compositions. A live album was recorded at the Douarnenez festival entitled 'Jazz En Baie'. In 1994 Vander and Simon Goubert created Welcome, a line-up composed of two drummers, two double-bass players, two saxophones and one piano. A first album appeared under the title 'Bienvenue'. Since 1996 Magma has returned to the stage with a group of talented musicians, playing the mythic works of the '70s repertoire to an audience mainly comprised of young people. The music of Magma is eternal!
And now one important historical aspect of Christian Vander's career, the Alien Trio of 1983, is preserved forever for generations of Magma fans and jazz fans to enjoy with the release of 'Alien - Live In Antibes 1983' CD.

Email ThisBlogThis!Share to TwitterShare to FacebookShare to Pinterest
Labels: Magma