PALEO TO RELEASE "A VIEW OF THE SKY" OCTOBER 26TH / ON TOUR NOW! 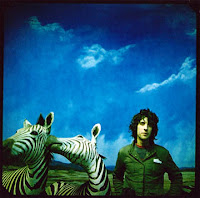 On October 26th Partisan Records will release the latest full-length effort from Paleo entitled A View Of The Sky. It will be available in CD, LP, Ltd. Edition Color Vinyl and Digital Download formats.

For Paleo, art doesn't imitate life, it is life. Self-contained, he has been traveling the country for the last 6 years. The time has been spent studying the endless facets of a world both in and outside of himself, all the while chronicling his journey through song.

Booking his own shows, he has been playing roughly 150 dates a year while living out of his car and staying with people kind enough to share a couch, a bed, and some breakfast. Homeless and at home, he seems to have found a refuge within his songs as a prolific lyricist and writer. He recorded a song every day for 365 days as a discipline in songwriting he called "The Song Diary". If you want to know Paleo, you have only to listen to his body of work, which at this point is staggering. Paleo's songs focus on what most people take for granted in their day to day and year to year, revealing not just a series of dots, but a portrait.

On his newest record, A View Of The Sky, the music mines a depth of greater purpose beyond the traditional. Song after song transports the listener through melodic landscapes unique, immediate, emotive, playful, and filled with longing. There is nothing contrived in the structures of his songs, and the phrasing is a deep rooted reference to the great writers who have come before him.

But deconstructing Paleo seems futile, because he has already moved on. His music is an echo that grows, builds to a crest, dies, and begins again, evolving always, whether someone is there to bare witness or not.