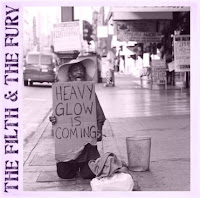 HEAVY GLOW is frequently compared to Queens of the Stone Age, Band of Skulls, and Blue Cheer. The band has released two EPs over the past year and a half, their first produced by Stevie Salas at Velvet Revolver's studio. They have recently released a follow-up EP entitled, "The Filth & The Fury." The EP's single, "Hot Mess" is featured in Classic Rock Magazine's July Edition. The album is currently nominated for Best Rock Album of the Year in San Diego.

Their music is receiving reviews and airplay worldwide:

Berkley Place Blog writes, Are they like The White Stripes? A little. But their music is tighter, better organized. Are they like Black Keys? A little, but the vocals are much better and they focus on extended 1970s-style guitar solos.

"Their EP does absolute wonders to the loins of women and I finally understand why Jimi Hendrix was getting laid all the time...If this band doesn't become a house hold name, it is a travesty. They cherry picked the cool aspects of the 70's rock scene, and left the disco pants for the assholes of Studio 54." - Blogs N'Roses