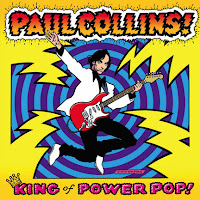 KING OF POWER POP! is the new studio album by PAUL COLLINS, one of the originators of the high-energy sound known as Power Pop.

Paul got his start in the late seventies as the drummer for the legendary NERVES, (with Peter Case and Jack Lee), later forming THE BREAKAWAYS with Peter Case, and finally starting The BEAT (aka PAUL COLLINS BEAT) in 1979.

KING OF POWER POP!, his third record of this decade is a complete return to his roots - to power pop, the sound he helped create and popularize, a sound that has seen a resurgence in recent years, a sound that is here to stay!
"For me this is the record that connects the dots, from The Nerves to The Breakaways to The Beat to today… this is the record that puts it all together!" - Paul Collins