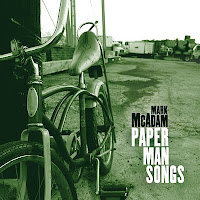 Brooklyn-based singer-songwriter Mark  McAdam is proud to release  his third solo album, “Paper Man Songs”, a unique collection  of material written in and around the perspectives of the characters  featured in the recently released independent comedy, Paper Man (starring Jeff Daniels, Ryan Reynolds, & Lisa  Kudrow).  With stories so aptly linked to the film, a number of the songs found  their way into the final cut. Much more than a typical film soundtrack,  “Paper Man Songs” is a beautiful accompaniment album inspired  by, and featured in the motion picture.
After film directors Kieran and Michele Mulroney tapped Mark to provide original music, he began  writing songs that would eventually form the musical foundation for  the movie. Upon completing the production of Paper Man, Mark  realized he had written enough original songs to compile a strong  stand-alone  record. The folk-tinged, indie-rock tracks highlight the power of a  well-played lap steel, cleverly building vocal hooks and subtly entwined   harmonies around stories as unique as the characters they were drawn  from.
Mark started his career in Los Angeles  where he was the front man of Sumack before starting Cranky  George with Kieran Mulroney, his actor/brother Dermot  Mulroney, and Pogues founder James Fearnley. Paper  Man Songs is Mark’s third solo album, following the acclaimed  2002 release Boy Wonder, and 2006’s Cavalcade. His songs  have been featured on hit TV shows such as Grey’s Anatomy, Men in Trees, and Californication. Mark is no stranger to  scoring film either. He composed original music for the documentary God Grew Tired of Us (Sundance Grand Jury Prize), the dark comedy Dante’s Inferno, and the upcoming Pool Party.
The Space Between
Paper Man
Mark McAdam