BROTHER DEGE ON DISCOVERY'S NEW "AFTER THE CATCH" SERIES! 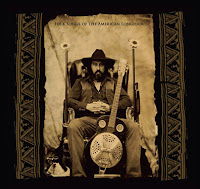 Get ready for some raw dirt, railroad pounding, swamp-fried, Louisiana Mekong Delta blues music this Tuesday night when Discovery Channel's DEADLIEST CATCH spin-off series AFTER THE CATCH opens with BROTHER DEGE'S new song "HARD ROW TO HOE" as the show's opening theme song. Not only will Dege's track from his recently released Folk Songs Of The American Longhair album be predominatly featured in the show's opening, but BROTHER DEGE will also make an appearance performing in the streets of New Orleans as part of the AFTER THE CATCH intro.
Like the mad lovechild of Robert Johnson and Jim Morrison, BROTHER DEGE (aka DEGE LEGG, the Cajun-born and Louisiana-raised leader of the rock band Santeria), has just released his highly anticipated “slide/Dobro record” Folk Songs Of The American Longhair, produced by 4x Grammy-winner Tony Daigle (Dr. John, Sonny Landreth, Gatemouth Brown, Bobby Charles), Legg and Primo (also from Santeria). This is Delta Blues for the 21st Century, raging out of the swamplands of Louisiana. Dripping with atmosphere and backwoods noir. The real deal—death-obsessed, god-fearing, foot stomping acoustic blues steeped in the devilish myths and haunted ambience that permeates every inch of Louisiana. Factor in some Historic longhaired rock & roll influences – from Sabbath to Black Flag – and you’ve got an art project and anthropological study wrapped in one time traveling package.
Folk Songs of the American Longhair takes the listener on a mind-bending, soul-crushing slide guitar journey into the backroads of the Deep South. Legg composed ten original tunes in the Delta-slide tradition, paying tribute to the old masters while pushing into the apocalyptic future. Much like the field recordings of Alan Lomax, the record tunnels into the ancient mysteries of pre-war blues, recorded in sheds, old houses and open fields. It’s like Son House at a surrealist convention.