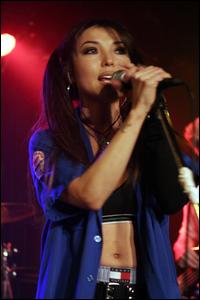 Much to the anticipation of the music press and fans worldwide, L.A.’s hottest modern rock band Dig Jelly, fronted by female Rock ‘n’ Roll wild child Rayko, has released a new EP called Predicate. Dig Jelly's unique mixture of music has been described as “Energetic, hook-driven, mind-blowingly, in-your-face modern rock with a lethal dose of pop.”
Featuring the alluring Japanese-born singer-songwriter/guitarist/pianist Rayko on lead vocals and piano who one critic acclaims, “Possesses the pipes to belt it out and scream with the best of them,” Dig Jelly are ready to take the world by storm with the release of Predicate!

Do you find yourself asking has music died? Has sincere emotional platitudes plateaued? Does the cookie cutter song writing mock the passion you seek? And has your thirst for authenticity been sedated by the staged productions that radio and TV call reality? Dig Jelly is an arsenal of emotional conflict expressed by a pantheon of sound. Creating walls of sound more detailed than the walls of our consciousness. They leap those walls and pillage from the realm beyond and bring it back for a special sonic spectacle. In short, Predicate is a brand new sonic attack from Dig Jelly that will shift your paradigm.

On March 16th Dig Jelly fans around the world were treated to the premiere of the band's new music video "Beautiful World", which was shot, directed and edited by Stephen Ohab Jr. and his team of Steven Spielberg's Showtime dark comedy/hit series United States of Tara.

Dig Jelly got chosen to be the house band on "Next Great Drummer", a pilot for a brand new reality TV show with Eric Seats (Beyonce, Rihanna, late Aaliyah, Missy Elliot...) Dig Jelly has been tearing up the stage at one of the many sponsors of the show, Sam Ash Music Stores tghroughout California, and they will be rocking out as they wrap up the show for the finalists at The Knott's Berry Farm on July 10th! All details are posted on the band's website. Dig Jelly also is going strong on "Your Next Record with Slash" contest held by Guitar Center! Go to http://www.yournextrecord.com/ register, and vote for them! Contest goes on till mid May!

If you want to check out Dig Jelly live but you're too far from where they are, check out their House of Blues Hollywood live concert video, along with many other kick ass videos on www.digjelly.com ! Along with the new Predicate EP, the band's first two CDs For Your Inner Angry Child and ParaNoize are available at CD Baby, Amazon. iTunes and and of course at digjelly.com. Both "Communication" and "Faka Laka Rcoksta" from ParaNoize are on the playlist of AZ's biggest rock stations 98 KUPD and KWSS 106.7fm!